Head of the Chemical Physics Department and Raman Imaging Group 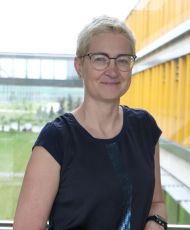 Professor Małgorzata Barańska is a graduate (1992) and doctor of the Jagiellonian University (1999), here she also obtained her postdoctoral degree (2007) and the title of full professor (2013). Since 1998, she has been employed at the Faculty of Chemistry of the Jagiellonian University, and conducts all her scientific activities at the Chemical Physics Department. She also conducts research at the Jagiellonian Centre for Experimental Therapeutics (JCET), in the creation and development of which Professor Barańska has been involved since 2009. There, she manages one of the three research groups, the Raman Spectroscopy Group.

The current direction of her research is related to civilization diseases, their development and treatment methods as well as drugs with endothelial bioactivity. To study endothelial dysfunction and pathology progression, she uses vibrational spectroscopy, mainly Raman imaging in combination with AFM, SNOM, fluorescence microscopy, biochemical tests, and chemometry. For many years, she has also been conducting research on the optical activity of biologically important compounds using chiraloptic techniques (ROA, ECD), including the mechanism of enhancing Raman optical activity through induction-induced resonance.